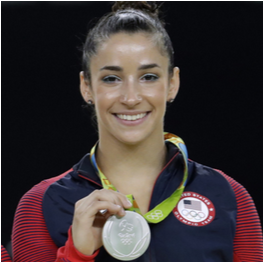 The event was attended by the Boca community as well asindividuals from Lynn. The Women’sCenter on campus aided attendance by bringing students to the event.

Raisman answered both generic questions and audience-submitted ones in the panel session. She first discussed how she arrived at the point she is today and then continued by telling the story of her role in the #MeToo movement. Raisman also provided advice to aspiring gymnasts, parents and young women in the audience.

“I started at two-years-old withmommy-and-me classes,” saidRaisman. “At eight-years-old, Imade the choice to stop playing other sports and continue with gymnastics.”

Among her consistent advice, Raisman encouraged young women aspiring to become Olympic gold medalists to do what makes them happy. Even at that, though, she acknowledged there are far more important aspects of life than being on the Olympic podium.

Growing up, Raisman’s parentswere passionate to ensure that her coaches knew her limits. Keeping this experience in mind, she advised parents in the audience to clearly define the roles of both themselvesand their child’s coach.

“My parents would often talk to my coach and tell them they were pushing me too much,” saidRaisman. “If my mom pushed me like they had, I would never havesurvived.”

Raisman transitioned into her story of being sexually harassed by her coach after discussingher journey to the world’s largeststage. She indicated that time to herself and consistent support from the community have been key in overcoming her struggles in the past year.

“One out of every four girls and one of six boys will be sexually assaulted before they turn 18,” said Raisman. “The numbers are even higher than that. Those are just the cases that are reported.”

One of Raisman’s greatestfrustrations as part of the #MeToo movement is that some simply are not being heard about their experiences. While she understands the idea that some men have been falsely accused, she is a firm advocate for listeningto others’ claims.

“You have a higher chance of getting assaulted yourself than being wrongfully accused,” saidRaisman. “It’s devastating to me how many people aren’t beingbelieved.”

Cole Nudel, one of the Lynn students who attended the eventstated, “It was a once in a lifetime experience. I think her and many others are crucial to today’s world because we need strong young women advocating for us and setting an example.”

Since her case came to light, Raisman has continued to speak out, encouraging every individual to seek resources that teach participants signs of abuse and ways to address various situations. As one of the hundreds of victims of the former USA gymnastics team doctor Larry Nassar, Raisman has hope for the future.

“I hope the world will get better,” she said. “I’m hoping our country’sgymnastics program is one day the leader in child abuse prevention.”

After empowering the audience with her story of overcoming trials, the two- time Olympian ended the night with inspiration for all in attendance.

“If you don’t believe in yourself, then it’s hard to get other people to believein you.”