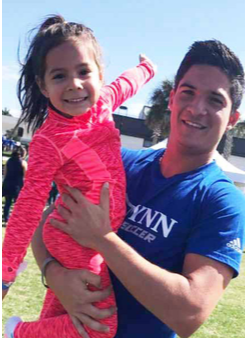 While playing on the nationalteam and representing one’scountry on the world stage may be only a dream for some, Lynn senior Pedro Hurtado recently made it a reality.

“Bergmann plays for the Brazilian national team. His coach told the Colombiannational team coach I wasinterested in playing mini football,” said Hurtado. “They watched me play in a friendlytournament and liked what I hadto offer.”

Hurtado played his first tournament with the Colombia team in August.

“We went to Boise, Idaho, toplay against Mexico and the United States in August,” said Hurtado. “My favorite experience thus far has been playing in the

World Cup in Czech Republic, though.”

With Hurtado on the squad, Colombia made a statement to the mini football committee and fans when the team placed third in the world at the tournament.

“A lot of people did not think we would do as well as we did,” said Hurtado. “We ended up beating Russia – the team that was predicted to win it all.”

Hurtado describes playing against teams from all over the world as an experience he will never forget. Due to its success at the 2018 Mini Football World Cup, Colombia has been invited to play in more international tournaments next year.

Hurtado, who will be graduate laterthis month with his bachelor’s degreein business administration, plans to pursue a professional career in the Major Arena Soccer League (MASL). While awaiting the MASL draft, Hurtado will put his business degree to use as a sales representative.