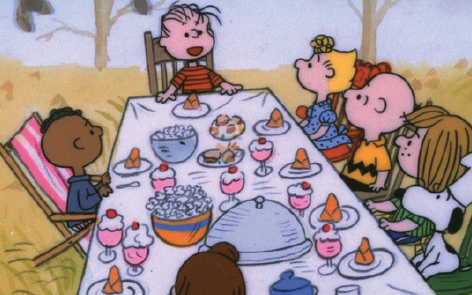 With Thanksgiving approaching, it is time to gather alongside friends and loved ones to watch classic holiday films.  These top-ten movies are sure to assist in welcoming the joyous occasion.

Charlie Brown’s attempt to string together a Thanksgiving dinner is the perfect beginning to a holiday movie marathon.

For anyone who loved The Addams Family, this is a must-watch.  In this Hollywood hit, Wednesday Addams savagely reconstructs the Thanksgiving story during a camp show.

Those traveling home during Thanksgiving break will especially relate to the adventure and humor throughout Planes, Trains and Automobiles.

This film earned Al Pacino an Oscar and has become a must-see Thanksgiving film, teaching the audience to keep an open mind during the holiday season.

This timeless holiday film takes place during the Macy’s Thanksgiving Day parade and prepares viewers for Christmas as well.

Kevin McCallister is one of the youngest and greatest troublemakers of all time in this holiday centric comedy.

This is the perfect film for those looking to watch romantic comedies during the holiday season. “Rom-coms and family comedies are so ideal for the holidays,” said Julia Gordon, digital art and design major.

In an aptly named film for a Thanksgiving movie marathon, viewers will join main character Claudia Larson on a journey to spend the holiday with her family.

This animation is perfect to watch with the younger members of one’s family. Plus, it will bring back memories for the adults as well.

Rocky IV: Rematch The Fight that Ended the Cold War is Returning to the Silver Screen