Jackie Birch, a multimedia journalism major, realized she had no time to waste when coming to Lynn as a student in the 3.0 accelerated degree program last fall.

Within the first three weeks of her freshman year, she attended the job fair. She landed an internship at  Brooklyn Café TV, where she was able to get hands-on experience. The host of the show, Freddy, would bring her to the The Health and Weath Network radio show to help with the production of the shows.

“What I love about communication is being able to connect with people. I love the psychology behind how we communicate with each other,” said Birch. “I find it extremely interesting, and important to understand how to effectively communicate and get to know someone better. One of my passions is helping people, and when I can communicate with someone well, I like to make that person feel important.”

From this internship, she was granted a position at WNN, where she is now the host of two radio shows. The show is aired on the WNN network, Amazon Fire, Brooklyn TV café and social media platforms.

“My typical day at work is a little crazy. In the mornings, I go to Brooklyn Café TV show to set up the studio, test the mics, and introduce myself to the guests,” said Birch. “I think shaking every person’s hand is one of the most important things as it has opened many other connections for me and it just helps me be a better communicator with networking.”

While she is at Brooklyn Café TV, she highlights and introduces the guests along with their businesses. In the afternoon, she goes to WNN to interview people on their companies and businesses.  She encourages the audience to engage in the show by asking questions.

“Both of the radio shows that I work for helped prepare me the most, I got to see the backstage action of my passion. I got to see the not so glamorous parts, and the parts that no one plans for as when guests cancel or technical problems,” said Birch.

On the side, Birch also works for Deck 84, a restaurant on Atlantic Ave. in Delray Beach. She spends her time there serving and hopes to become a bartender soon.

Birch feels as if she has found a home and family within her jobs, and feels very blessed to be working there. 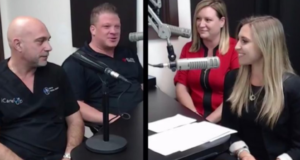 What Students Should Know Before Beginning Research