Lynn Student Makes a Difference in Belize and Rwanda

Nadeem Abu Hijleh, senior, is heavily involved in the Social Impact Lab on campus, having participated in the Ambassador Corps eight-week program in Belize and as a Millennium Fellow working on a project called “Its H.E.R. Business,” which reuses jean jackets with proceeds going to a school in Rwanda.

Over the summer, Abu Hijleh was selected to the Ambassador Corps program. He got the opportunity to work in Belize for an organization called Belize Enterprise for Sustainable Development (BEST). At BEST, Abu Hijleh worked on sustainable projects in agriculture, micro-financing as well as being the director’s assistant.

“I was always a positive person, but going to Belize showed me first-hand the power of positivity,” said Abu Hijleh. “People made the best out of whatever they had, although it is minimal compared to what people living in developed countries [have].”

Two weeks before leaving Belize, Abu Hijleh came up with the idea of painting a landmark bridge in the towns of San Ignacio and Santa Elena.

“The hopes for this project [are] to create employment for locals through the tourism industry and create sustainable economic growth,” said Abu Hijleh, international business management major. “I am currently working with the San Ignacio [and the] Santa Elena Town Council, Galen University, and local artists to implement this project.”

After Thomas and Del Valle returned from their Ambassador Corps journey in 2018 in Rwanda, they were so affected by these efforts that they wanted to find a way to fundraise for a school they visited. That is how as a group they came up with the idea of “Its H.E.R. Business,” an ethical jacket brand striving to make a difference in the world.

“We started reusing jean jackets, painting and designing them and putting them up for sale,” said Abu Hijleh. “Last year, we raised approximately $1,000, which was a trial run. After success in this initiative, we are working on becoming an LLC in order to have more resources to help us make a larger difference.”

For more information on “Its H.E.R. Business,” visit the enterprise’s Instagram page @itsh.e.r.business. 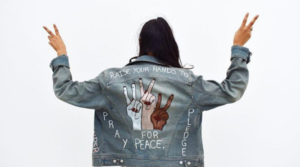 EDITORIAL: THE WAR THAT GOES BEYOND THE BATTLEFIELD

Coming to a Grocery Store Near You

From College Student to English Teacher