Lynn alumnus Rikki Soumpholphakdy began a career at ESPN on Oct. 7, 2019 as a digital video and social associate.

Originally from New Britain, Conn., Soumpholphakdy transferred to Lynn in 2015 and graduated in 2017 with a B.A. in multimedia journalism. This year, Soumpholphakdy received his M.S. in communication and media studies and practices.

“I was always an athlete growing up, but I knew if I couldn’t be a pro, I’d put my passion into sports media,” said Soumpholphakdy. “I knew by the 7th grade when I took a class that was geared towards making cool videos with Windows Movie Maker, I’d want to be involved in sports media.”

Soumpholphakdy was sent to work at ESPN headquarters in Bristol, Conn., which is just a short drive from his hometown. Soumpholphakdy‘s role as a digital video and social associate is to curate video content for all digital platforms. This would include video content on ESPN’s website, app or YouTube channel that he and his team publish daily.

Prior to this, Soumpholphakdy spent time working at NBC Sports and a local radio station in Hartford, Conn. During his free time, Soumpholphakdy went to championship boxing matches in the area to create video, photo and blog content. Soumpholphakdy mentions how boxing has always been his niche within the sports world.

“I think what I benefited from the most was the NBC Sports position I was in and everything I learned in undergrad while attending Lynn,” said Soumpholphakdy. “I networked and made professional relationships in both of those jobs so when I went for the big one, I’d have references.”

Soumpholphakdy explained the importance of his competitiveness throughout the hiring process. Soumpholphakdy did this by reaching out to managers and recruiters of ESPN on LinkedIn, constantly looking for new openings and finally landing an interview. Soumpholphakdy credited his professors at Lynn for giving him the knowledge and skill-set needed for his career at ESPN today.

“Professor [Stefanie] Powers molded me in terms of the editorial aspect, while Professor [Mark] Cone helped me grasp graphic design,” said Soumpholphakdy. “Professor [John] Bennardo helped me master video production.  I took all of these things and applied it to my overall skill set.”

Soumpholphakdy considers his position at ESPN his dream job, but is still looking to reach new goals. In the future, Soumpholphakdy hopes to specifically work on boxing content at ESPN. 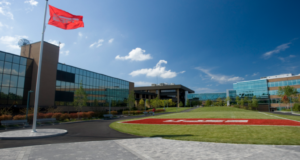 The Best Time of the Year is One For Family