Delray Beach Native Cori (Coco) Gauff raised her arms in disbelief when the ball of her opponent Jelena Ostapenko was called out, leading Gauff to her first WTA singles title.

It has been a curious journey that led Gauff to the title. Based on her position in the world ranking, Gauff had to play the qualifying round for a spot in the main draw of the WTA tournament in Linz, Austria. There, she lost in the second round to Tamara Korpatsch but was then offered a lucky loser spot due to the withdrawal of Marika Sakkari.

“It’s just insane that I got in as a lucky loser and now I’m the champion,” said Gauff (after the final). “My dad told me when I got in, before the first main-draw match, ‘You can’t lose twice in the same tournament.’”

Gauff’s rise to the top certainly did not come out of nowhere. In July, the American teen sensation became the youngest player to reach the Wimbledon main draw and beat Venus Williams in straight sets.

Apart from being extremely talented, Gauff is also known for being passionate and hard-working on her way to fulfilling her dreams. Throughout the last year, Gauff has been working out at FTX wellness, the same gym that Lynn athletes used during the 2018-2019 academic year. In between tournaments, Gauff returns to Delray Beach where she practices and lives with her parents and two younger brothers.

“It is very inspiring to see her work hard in the gym,” said Eliska Petrackova, junior. “She certainly is one of the most talented athletes in the world of sports right now and motivates me to keep working on my own tennis at Lynn.”

To be more flexible with tournaments and practice hours, Gauff is home-schooled by her mother. Being so successful at such a young age is not always easy, but Gauff handles it very professionally. In fact, the teen is trying to keep humble expectations and just enjoy the process and improving her craft.

“I had to remind myself that I am 15 and that I have the rest of my life to continue to improve and play tennis,” said Gauff.

Just a week after winning in Linz, Gauff won her second doubles title at the professional level, winning the WTA in Luxembourg alongside her doubles partner Caty McNally. The two American teens upset Kaitlyn Christian and Alexa Guarachi 6-2 6-2 in the finals. After losing the first round in singles in Luxembourg, Gauff is now back in South Florida to prepare for upcoming tournaments. 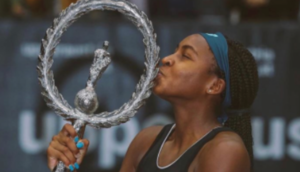 BRINGING IN THE CREW

A Resident Assistant Speaks Up About Hiring Process