“Sometimes I wonder how I do it,” admitted Biles after receiving her gold medal.

Biles won the world title, crushing her own personal records in the process and claiming the title of champion with the largest margin victory. Biles qualified for all four apparatus finals, earning the gold medal in the vault, floor and beam.

“It’s not out of cockiness,” said Biles to USA TODAY. “I’ve won five world titles and if I say, ‘I’m the best gymnast there is,’ (the reaction is) ‘Oh, she’s cocky. Look at her now.’ No, the facts are literally on the paper. I think it’s important to teach (young girls) that.”

Biles is statistically the best gymnast history has ever seen, and currently no one compares in terms of skill nor talent. Biles stays motivated by pushing the limits of the sport and herself. In the world championship, Biles completed a triple-double on the floor exercise, and a double-double off the balance beam, making her the first person to ever complete such moves.

Not only was Biles successful in the championship, but the U.S. national team as a whole showcased their skills as well. The women’s team won first place, with team member Sunisa Lee winning second place in floor exercise and third in bars. Jade Carrey, part of the winning team, won second place in vault, right behind Biles. 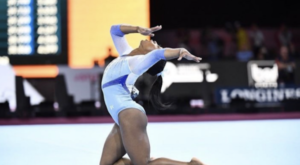