Due to related causes from COVID-19, mail-in ballots are becoming more popular than ever to help decrease the virus’s spread and keep things under control. However, many people, including President Trump, are concerned about voting’s accuracy and integrity by mail.

Trump is not alone in this standpoint. South Floridian, Dakota Lopez, agrees with Trump, “I think they should hold off on running the election. I think a lot of the ballots coming in will be messed with, and I don’t think it will be a fair telling of who’s supposed to win.”

Others do not seem to be as worried as Lopez. Massachusetts resident, Veronica Orozco, has a different take on it, “Trump seems too obsessed in pushing back the election. He knows he has a high chance of losing and is trying to postpone his defeat. I think if it’s done honestly, mail-in ballots will go fine, and Biden will win.”

Amaya Davis, a 19-year-old from San Diego, voices her hesitation with the mail-in ballots, “This is my first year voting, and I am worried

that my vote won’t go through. I have a recurring feeling that it’s going to be tampered with if it’s not a vote for Trump.”

Despite the varying views on it, state and local officials seem to debunk many of the speculations. Based on reports from 2018, the Washington state’s Director of Elections, Lori Augino, stated that “of nearly 3.2 million ballots cast, only 0.004 percent of the total ballots cast may have been fraudulent.” But while this proves for very slim mistakes, the fear amongst people is still prevalent.

Voting in-person amidst the pandemic has been a sore subject for some. Many are worried about the spreading of COVID-19 but are willing to run the risk. “As long as we follow state rules and be safe, then I don’t know why it should be an issue,” said Boyce. “Can we really allow the risk of our votes being rigged and our voice be taken away?”

With the election approaching rapidly, the decision to mail-in ballots is becoming increasingly significant. The ability to vote gives the people a voice in the matters they find meaningful. Mail-in ballots seem to cause more fear in the system than voting in person, despite the health risks attached. 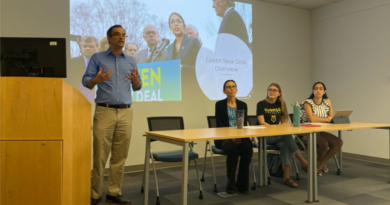 From Writer to Editor-in-Chief of Her Campus: Guiliana Carozza Shares her Future Plans for Her Campus