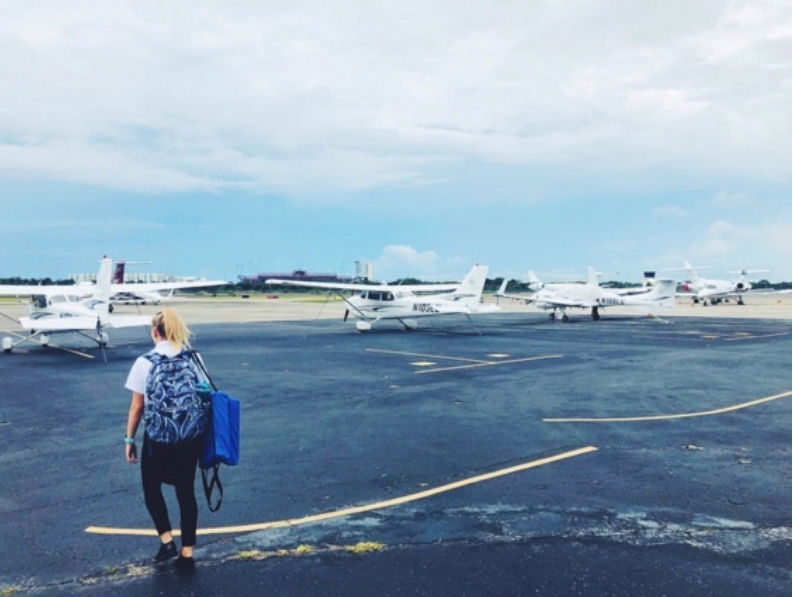 Lynn aviation student Elizabeth Erbe recently discussed her passion for flying and her online efforts to encourage young girls to get involved in the aviation industry.

Currently, only six percent of aviators in the U.S. are female. Due to this lack of representation, becoming a pilot never crossed Erbe’s mind before college. Similar to many other high school graduates, Erbe was not sure what she wanted to do going into college, but she knew that she loved planes and traveling.

Erbe originally entered Lynn’s College of Aeronautics with a goal to become a flight attendant, but then she thought “Why not just fly the plane?” When Erbe took off in her first discovery plane ride, she automatically fell in love with flying and knew that she made the right decision.

In hopes to inspire others, Erbe started an Instagram account called “She Flies the World” so she could share her stories and adventures in flight training with others. Erbe’s aspirations are to show other girls and women that they can get involved in aviation even if there is only a small percentage of women in the industry.

“I would love to one day make this brand bigger to help younger girls finance their flight training through scholarships,” said Erbe, sophomore.

“I want to inspire [females] to chase after their dreams, never settle, go big and reach for the sky,” said Erbe.

Erbe loves to learn difficult flight maneuvers which is why she enjoys the challenge of take-off and landing so much. She has gained confidence and self-love through these exigent demands as a pilot in training. After take-off, Erbe views flying as a peaceful experience where she can get away from everything.

“I feel like flying is one of the ways that freedom is expressed,” said Erbe.

To follow along with Erbe’s adventures on becoming a pilot in Lynn’s aviation program, check out her Instagram @shefliestheworld.