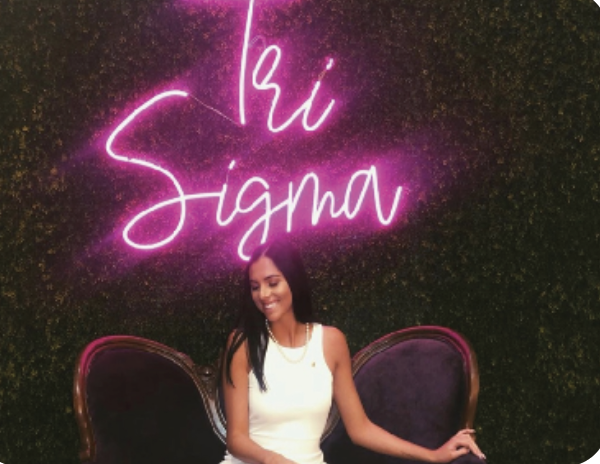 When Sosa was a new member in Tri-Sigma, she began her leadership role within the chapter when the first elections occurred, running for the education director position. Once sophomore year elections came around, she ran for vice president of operations.

“When I came into chapter for voting, I noticed everyone smiling at me, and I was a bit confused – I saw that I was selected as president,” said Sosa. “I was super hesitant and reluctant at first, but my advisor spoke to me and explained how ready I was to take on this very important position. Once I realized that the entire chapter believed in me, I just felt in my gut that I was capable of handling this position to the best of my ability.”

Sosa shared that, during her first term as president, she was a quiet leader and learned over time. For instance, she would find herself answering emails at 2 a.m. on a Saturday night.

However, attending the President’s Academy in Nashville helped Sosa learn to manage her time for Tri-Sigma and her life outside of the sorority as well. It was there she learned how to have “office hours” and to have “me time.”

In her current term, she feels as if she is more productive and organized due to the experience she has under her belt. Sosa expressed that she is still learning, and the chapter continues to grow. Sosa said she tries her best to be approachable, personable and patient with all Tri-Sigma members.

“There’s going to be times when people question you, and you may not know all the answers every time, but that’s okay because you have your resources and the organization to support you no matter what,” said Sosa.

Sosa encourages those who are nervous to take on a leadership role within Greek life and to learn as much as they can about the rules, regulations and bylaws before starting the positon to feel confident.

“If you told me three years ago I was going to be president of this organization, I would not believe you,” said Sosa. “Now, looking back, that was the best decision I’ve made at Lynn without a doubt.”