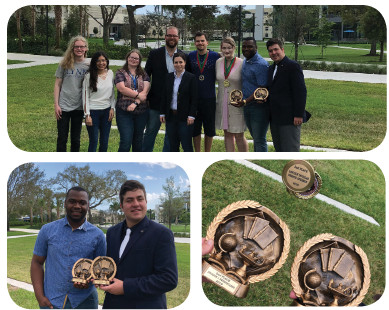 Though the Lynn debate team previously competed in the FIFA tournament, this was Lynn’s first time hosting the event. Competitors, volunteers and judges raved about the championship’s success, and the Lynn community showered the debate team with support. A total of 28 Lynn faculty members volunteered as judges, and Professor Paul Gormley provided food for the competitors.

“This was the smoothest FIFA tournament I’ve ever seen,” said Jon Conway, director of speech at the University of Central Florida and FIFA president.

“My fear of debating an American-style policy debate was conquered thanks to great support from the coaches and the team,” said Samo Nvota, freshman team member.

“The volunteer faculty, staff and students of the Lynn community came together to help the debate team put on the best state tournament in years,” said Hamm, Lynn’s director of forensics. “I am extremely grateful for everyone’s help, from the administrative support to the competitors themselves that worked in concert so well. I will work hard to keep Lynn Debate in the spotlight through my newly elected position.”

The debate team looks forward to its future competitive endeavors, especially its first international tournament in Panama next month. For more information, please contact Hamm at rhamm@lynn.edu. Team meetings are held every Tuesday and Thursday at 5 p.m. in IBC 311.