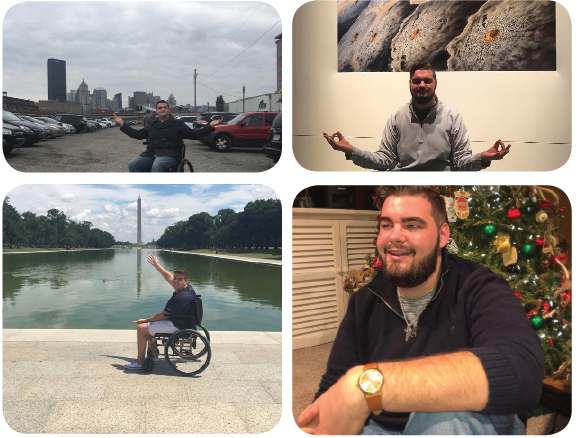 Patrick Berton, a sophomore majoring in political science, has excelled after suffering a freak accident while playing football, one that left him with a condition affecting his ability to walk.

At age 12, the Pittsburgh native was tackled from behind, a blow that led him to hit the turf awkwardly. After the collision, Berton noticed something had gone awry; he quickly began to encounter migraines and difficulty keeping his balance.

“Doctors thought that I just had a concussion,” said Berton. “They didn’t think more of it. Basically, everyone thought I just needed some rest.”

Soon after, though, Berton’s struggles worsened, leaving him unable to walk on his own. He visited neurologists across the East Coast, including the director of neurology at The Johns Hopkins Hospital in Baltimore. It did not take long for Berton to receive yet another diagnosis – conversion disorder. – after it was realized he had been sorely misdiagnosed previously.

“Around that time, it was a low point for me, as it would be for anyone,” said Berton. “My family and I just wanted answers. We couldn’t seem to find any.”

Following this stretch of countless medical visits, Berton began intensive therapy to improve his balance and his basic cognitive functioning. After extensive research and additional appointments with specialists, it was determined the freak accident nearly one decade ago was the root cause of Berton’s struggles.

“Ultimately, I did have a concussion the whole time. It was all the mistreatment that made everything worse,” he said. “Still, I try to stay positive and avoid thinking about the negative, worst case situations.”

While Berton has been in a tight spot from the beginning, he still finds ways to be one of the most heavily involved students on campus.  The sophomore works with numerous clubs and organizations on campus, and he is currently studying abroad in Berlin for the spring semester.

After graduating, Berton has aspirations of going into law school to continue his passion for politics and law.

“No matter what happens, I have always had a positive mindset and attitude,” said Berton. “I just take it one day at a time and make sure to savor the good things I have been a part of.”