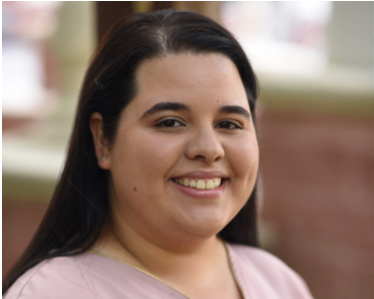 After working in Lynn’s Housingand Residence Life as a resident assistant and community advisor, Katheryn Milian realized her true passion upon graduation and choseto pursue a master’s degree instudent affairs.

Prior to graduating in May with a major in public relations and a minor in drama, Milian was heavily involved on campus. In addition to Housing and Residence Life, she served as student ambassador, peer leader, library staffer and a key member of the Lynn Leadership Institute, among other roles. With all these accomplishments, Milian was named the 2017-18 female student of the year.

everything what you put in,” saidMilian. “That’s something I try tolive by now.”

When she began applying for jobs, she found difficulty in locating the perfect fit. Milian always loved serving as a resident assistant and community advisor, though, which provided her a pathway for the future.

Consequently, Milian chose toget her master’s degree in studentaffairs and is currently studying at Nova Southeastern University in Palm Beach Gardens. There, she is a graduate assistant for student staff development and resident academic initiatives in the Residential Life and Housing department.

Milian. “Through that office, I took on various leadership positions on campus that showed me how much I loved helping college students.”

Milian credits Lynn for teaching her numerous lessons that she intends to carry for the rest of her life. As she looks forward to the future, she is confident her experiences as a Fighting Knight have prepared her to succeed immediately after her time at Nova Southeastern comes to a close.

“If I could give one piece of advice to students, I would tell them they do not need to follow their major,” said Milian. “I was open to new opportunities and found something more than a career, I found my passion.”