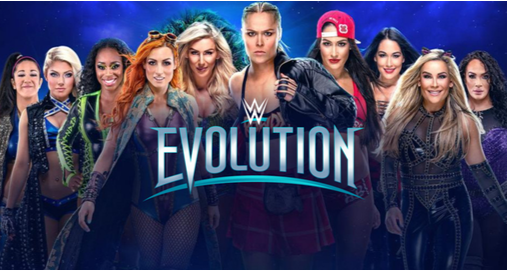 With women in sports beginning to gain increased recognition for their tireless efforts, numerous organizations support the movement to uphold their support for social balance.

World Wrestling Entertainment (WWE) recently held its first-ever all-women pay-per-view event at the Nassau Veterans Memorial Coliseum in New York. This showcase, WWE Evolution, allowed women from any division of the wrestling brand to receive their moment in the spotlight.

“Women getting more recognition in sports is a great opportunity for people to realize that we work as hard as men when it comes to sports,” said Gabby Moreira, senior.

Not only did WWE Evolutionrepresent all of the women’s hard workin the sports entertainment industry, but it also showed how the movement toward equality has strengthened. In fact, athletes including Ronda Rousey continue at the forefront with their efforts to highlight women sports stars.

Rousey, a WWE superstar, played akey part in the production of this year’sall-women event. In 2016, the WWE replaced the term “divas” with the more generic “superstars” in its continuous efforts to put individuals of all genders on a level playing field.

“History shows that women have had to struggle and fight to simply participate in any sport,” said Frank Torres, sophomore. “For them to now be at this point of recognition, to receive such honors for their dedication is absolutely amazing.”

Rousey provides a powerful example for young girls after competing at the Olympics and headlining multiple WWE showcases. As the company wants to illustrate, the superstar shows by example that women can be strong and undeterred against any opposition.

Following the success of WWE Evolution, the brand has suggested

it will continue to produce similar all- women showcases.