Viewers who spent countless nights in fear of Bloody Face, Rubber Man or other terrifying characters from the hit television series “American Horror Story,” (AHS) are in for a brutal introduction to tonight’s premiere of the forth season, “Freak Show,” at 10 p.m. on FX.

Spectators have been anxiously waiting for “American Horror Story: Freak Show,” which takes place in Jupiter, Florida, to hit the television screens for the past few months. After three successful seasons, Ryan Murphy, co-creator of AHS, gushed to Buzzfeed about what viewers are most likely going to expect with this new anticipated season.

“We said in the writer’s room that if we were going to do clowns, we were going to create the most terrifying clown of all time,” said Murphy to BuzzFeed News. “That was our goal when we were writing him but I’m worried about people being too afraid of our clown. It’s heart-stopping what he does. I’m worried. I’m worried that people are going to have cardiac arrest.”

Not only will “Freak Show” be featuring John Carroll who plays Twisty the clown, viewers will be excited to see a lot of the previous actors from the past three seasons return to the screens.

“One of my favorite things about American Horror Story is that Ryan Murphy has such an incredible cast,” said Salomey Owusu, junior. “I love that the actors play completely different roles each season, it really shows how talented they are.”

The actors in AHS are challenged by the fact that each season they are thrown into completely different characters, settings, story lines, plots and time periods. The first season was “Murder House,” followed by “Asylum” and most recently “Coven.”

This season will not only have Jessica Lange as a German ex-patriot running one the last American Freak Shows in 1952; but also Kathy Bates as a bearded lady, Sarah Paulson as conjoined twins with two heads, Angela Basset, Gabourey Sidibe, Denis O’Hare, Evan Peters, Emma Roberts, Frances Conroy and other previous well known actors.

Murphy is also bringing singer/actress Patti LaBelle, world’s smallest living woman according to the Guinness World Records, Jyori Amge, actors Michael Chilklis and West Bentley, and “All My Children” actor Finn Wittrock on board for his outstanding cast.

“I can’t wait to see what Kathy Bates does as the bearded lady,” said RJ Parrillo, freshman. “I feel like she will be surprising in the way she acts.”

Murphy also announced that the premiere will be 90-minutes long, instead of the usual 60-minute airtime.

If viewers thought that the previous three seasons were terrifying, make sure to tune into FX tonight and be ready for what Murphy believes to be his best season yet. 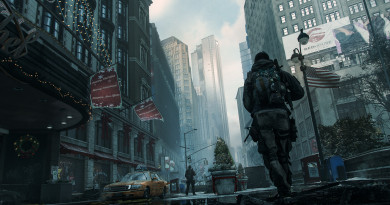 The Division Beta: A First Look

The Thin Line Between Prank and Assault

The Neighborhood Watch: “The Meeting”