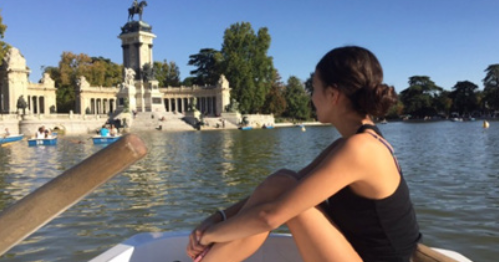 Nazik Bergsma is able to speak five different languages. She learned them all starting at a young age growing up in Morocco and is glad she did.

Bergsma is a freshman originally from the Netherlands who moved to Morocco when she was only two years old. Her father is Dutch and her mother is Moroccan. Her diverse background is one of the reasons she speaks Arabic, Dutch, English, French and Spanish.

“The international aspect of Lynn University was a major factor as to why I applied,” said Bergsma.

Bergsma started speaking multiple languages at a young age starting with Arabic, Dutch and English. When she was around 10 years old, she began learning French and when she was fifteen, she started learning Spanish for fun.

“When one lives in Morocco, you have to speak French and Arabic.” said Bergsma. She speaks English because she attended an American high school back home.

“I want to be able to speak another language,” she said. “This language would be Italian since my mother can speak it.”

Being multilingual has a lot of advantages. It helps Bergsma make her way around town when she travels to different countries. It also makes it easier for her to communicate with foreigners when she needs to find directions or order at a restaurant.

“It is an indescribable feeling to be able to understand all these languages,” she said.

Speaking different languages is hard and requires lots of effort, however, the outcome is worthwhile. When one expands the number of people he or she can fluently converse with and build relationships with, the possibilities are endless. In today’s world of interconnected cultures, speaking another language can also open new doors.