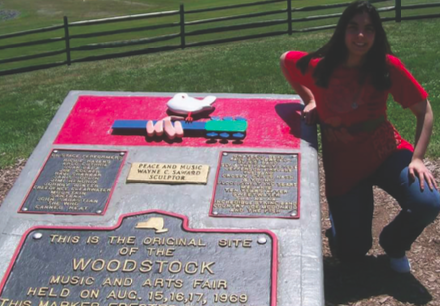 One of the many benefits of attending a small-sized university is that students receive numerous opportunities to explore their career field interests while they learn about them in the classroom. Meagan Paese, a student studying communication, music and history, has been broadcasting a weekly music radio show called “The History of Rock and Roll,” from the third floor of the library since 2010.

Originally from Coral Springs, Paese fell in love with music at a young age. Today, she can be seen around campus with her violin, a true emblem of her love of the arts and performance.

Paese also has a passion for history’s most beloved bands, historical events and media icons. Her weekly radio show often receives calls from individuals that were close to history’s classic icons and who wish to have their legacies live on for years to come.

“I started my radio show when I came to Lynn University back in 2010,” said Paese. “I was trained by Bob Trainor [and he would] tell me what to do and then I decided to call it ‘The History of Rock and Roll.’”

Past listeners of her show often hear favorite songs being played by the Beatles throughout many of her broadcasts. Paese also plays music from different generations and categories in order to reach a wider audience of people who enjoy music from a spectrum of eras.

Paese said that the people she has interviewed and continues to interview on her show are her inspiration. “I would get Joe Johnson, the host of Beatle Brunch, Chris Macdonald, an Elvis Presley tribute artist and Bobby Hart, singer and songwriter for the Monkees.”

For the past six and a half years, Paese’s show has been tuned into by hundreds of audience members from around the world. This past March, her show received a record number of listeners, amounting to 1,800 people.

Paese said that while most of her listeners tune in from her website, thehistoryofrockandroll.net, some local listeners still tune into Knight Radio, broadcasting on 96.3 FM around campus. She adds that those interested in her previous shows may visit her website to listen to all of her recorded broadcasts on demand.

“We get a lot of listeners from Florida, New York, Ohio, Chicago, California, Memphis and also London and Liverpool, England,” said Paese. “I post it on my Facebook page and my dad helps out with spreading the word about the show in group emails or card mailings.” She even has a website designer working with her to constantly update content online.

As her show has been increasing its number of listeners weekly, fluctuating often due to special event shows and guests, she also projects her future for the next five years. “I want to do this as a professional radio show,” said Paese.

One might wonder how Paese found her passion for broadcasting and her dedication to some of music’s best musicians. She shared her story of how it all began at the age of 12.

“It all started when I was 12 years old. I saw a Disney movie called ‘Lilo and Stitch’ and they were playing Hound Dog by Elvis Presley,” said Paese. “I got into that music and then radio with various genres. It changed my whole life.”

Many of her show’s guests are very important people in the music industry. Paese shares her dedication to her show and said that anyone could speak with anyone, it is just a matter of persistence and patience.

“[For] Chris and Joe Johnson, I just emailed them and asked them if they wanted to come on [the show],” said Paese. “I just sent them messages to see if they wanted to be on the show [this past] spring or next semester.” For Bobby Hart, she said they came to her. “I got a call from Boyce and Hart, a fan club founded by Caroline Boyce, the widow of Tommy Boyce.”

With all of these accomplishments in her life thus far, she was asked if she may wish to share anything with readers about all that she has achieved. She was extremely thankful for her father and many faculty members around campus.

“I would like to thank Dad, Bob Trainor and Professor Vermes because they all trained me really well,” said Paese. “I want to thank Professor Pickering, Professor Greaney and Dr. Watson, political science professors, for giving me historical experiences.”

Her show broadcasts live this semester, Wednesdays from 1:30 until 4:30 p.m. both online and on 96.3 FM On demand playback of her previous shows is available free of charge, all day, every day.

A big concern in today’s technological society is whether or not radio may be on the decline. As Paese has shown and continues to show thousands of weekly listeners from around the globe, the music will live on as long as the people continue to support it. As her dedication to keeping some of history’s greatest musicians prevails, her radio show is likely to continue to spread the joy of past decades’ greatest songs, one artist at a time.

As her dedication to keeping some of history’s greatest musicians prevails, her radio show is likely to continue to spread the joy of past decades’ greatest songs, one artist at a time.