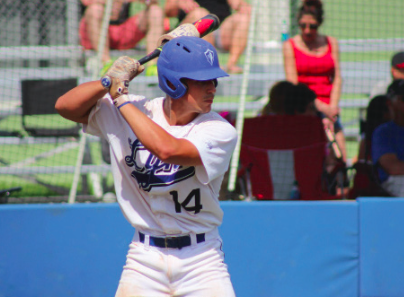 Some baseball players prepare for a game with a routine, others with good luck charms. Regardless of the method, no one player is alike when it comes his “system” when gearing up for play.

Baseball players refer to the sport as a “thinking man’s” game. Whether we stand on the mound or in the out field, we find ourselves thinking about each action, play and strategy. We also have time to develop seemingly strange habits to keep ourselves in focus.

To many, these habits represent superstitions. Some common superstitions include putting on a certain batting glove first, never stepping on the foul line, never walking between the catcher and umpire when going up to the plate and most important of all, not talking about a pitcher pitching a perfect game, when he is in the midst of doing so.

The Lynn baseball players, of course, are not above these bizarre routines. Most members on the squad has something superstitious up his sleeve before a game, whether he is aware of it or not.

Personally, it is with much effort that I try to refrain from engaging in this nonsense. But every now and again I catch myself, for example, reaching for the same pair of socks that I had a good game in.

As a team, the spots in the dugout are staked specifically for each individual to place their equipment. There are no coincidences when it comes to the dugout’s format. This may just be routine, but I speculate that it is indeed a team supported superstition.

The dugout conspiracy does not end there; when someone hits a home run, it is essential that each player inside the dugout return to the same place where they were sitting or standing so that the next guy at bat can hit one too. More often then not, much to my demise, I fall as a believer of these presumed superstitions. I have realized that whether it is standing in specific terms, visualizing plays happening, tapping the plate a specific number of times, moving the body in certain rhymes or allocating a specific “spot” in the dugout, superstitions in baseball, or in any sport for that matter, are alive amongst all players.

No matter how crazy or seemingly unnecessary these superstitions or routines are, they provide athletes with comfort and confidence. One thing is for certain (and not left to superstition): when we receive a ring at the end of the year, as crowned national champions, we will not be the crazy ones anymore.

The opinions expressed in this article are that of the reporter.