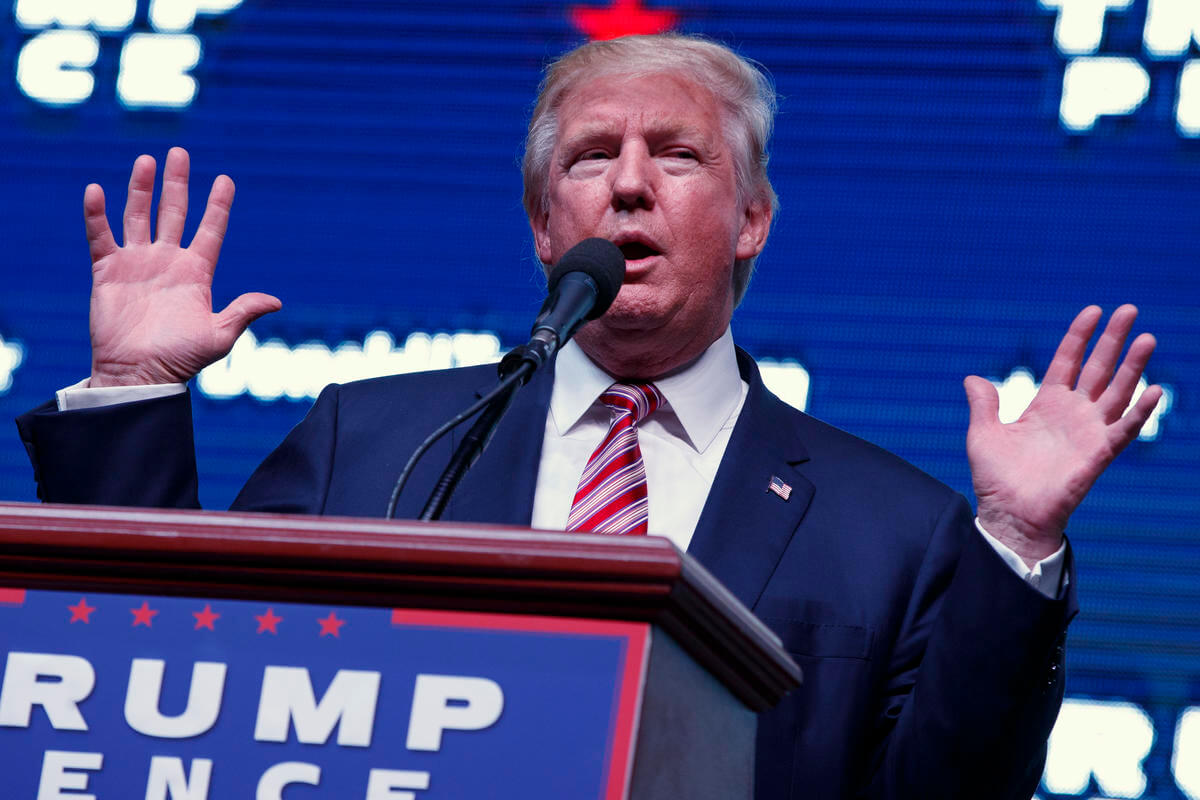 WEST PALM BEACH, Fla. (AP) — Rocked by allegations of sexual assault, Donald Trump on Thursday lashed out at America’s political establishment as “going somewhat crazy” over the accusations as the deeply divisive campaign devolves into charges and countercharges of predatory treatment of women.

“The belief that you can do anything you want to a woman, it is cruel, it is frightening, and the truth is it hurts,” Obama said in battleground New Hampshire. She declared, “Enough is enough.”

Trump saw it another way ahead of a campaign appearance in Florida.

“What a sleazebag,” he said, shaking his head in disgust, after a reporter asked whether Trump had ever touched or groped woman without her consent.”

“It’s been a very interesting period of time,” he told Florida business leaders ahead of the rally in West Palm Beach. He added, “The establishment is going somewhat crazy.”

Trump’s flailing campaign signaled it would spend the election’s final month relitigating Bill Clinton’s marital affairs and unproven charges of sexual assault, as well as what Trump says is Democratic nominee Hillary Clinton’s role in intimidating the women who were involved.

Yet Trump is a deeply imperfect messenger, given that almost everything he says is being overshadowed by a flood of allegations that he kissed and groped women without their consent.

The New York Times and the Palm Beach Post on Wednesday reported stories about three women who alleged Trump had inappropriately touched them. Separately, a People Magazine reporter wrote a detailed first-person account of being attacked by Trump while interviewing the businessman and his wife, Melania Trump.

Trump on Thursday took to Twitter to denounce the Times story as a “total fabrication,” and to assert that the incident cited by People “did not happen.” His campaign threatened to sue.

Just four days ago, Trump campaign manager Kellyanne Conway promoted a tweet from Clinton declaring that “every survivor of sexual assault deserves to be heard, believed, and supported.”

“‘Every’ the operative word here,” wrote Conway, whose campaign is now attacking the credibility of the new allegations against Trump.

The stories come less than a week after the publication of a 2005 recording in which the Republican nominee boasted of using his fame to kiss and grab women.

In an interview broadcast Thursday, the soap opera actress in the video said Trump’s comments were offensive. But actress Arianne Zucker, on NBC’s “Today,” said she wasn’t shocked, given “that type of personality.” She said that’s “probably why it doesn’t mean a lot to me.”

The revelation of the video last Friday prompted many Republicans to withdraw their support for Trump — with some calling for him to drop out of the race — though a handful have since switched back to supporting him.

Clinton adviser Jennifer Palmieri said the latest revelations match “everything we know about the way Donald Trump has treated women.”

Taken together, the stories about Trump and his retorts about Bill Clinton have plunged an already rancorous campaign to new lows. The real estate mogul has also aggressively charged that Hillary Clinton not only needs to be defeated in November but also “has got to go to jail.” And his campaign is facing questions about ties to Russian interests accused of hacking Democratic groups, as well as the hacking of a top Clinton adviser’s emails.

For Trump, the cumulative effect appears to be a tumble in the battleground states he needs to win in November. What was already a narrow path to the 270 Electoral College votes needed for victory is virtually indiscernible for Trump unless there’s a significant shake-up in the race between now and Nov. 8

Rather than trying to make up ground by shifting attention back to issues like trade that have energized Trump backers and could appeal to new voters, the Republican campaign appears to be moving swiftly to make Bill Clinton’s past a centerpiece of its campaign.

Building on Trump’s decision to bring three Bill Clinton accusers to last week’s presidential debate, the Republican nominee is expected to have the women appear with him on stage at rallies and do television interviews, according to a person briefed on the plan but not authorized to discuss it publicly.

Trump supporters are also confronting Hillary Clinton with the accusations about her husband. Multiple Clinton rallies were interrupted this week by hecklers shouting “Bill Clinton is a rapist.”

Bill Clinton never faced any criminal charges over the allegations, and a lawsuit over an alleged rape was dismissed. He did settle a lawsuit with one of the women who claimed harassment.

The Trump campaign’s hope is to showcase the decades-old accusations to young voters, particularly women, who may not have been old enough to remember the controversies that dogged the Clintons in the 1990s. If the campaign can’t get them to vote for Trump, the hope is that they will stay home and depress turnout, which would likely hurt Democrats.

But it’s unclear whether Trump’s strategy is even aimed at winning the election at this point. Increasingly, Trump’s campaign feels like an opportunity for longtime Clinton opponents to air decades worth of grievances about the Democratic power couple on the biggest stage in American politics.

Trump confidant and informal adviser Roger Stone has long encouraged Trump to make Bill Clinton’s alleged assaults and the way his wife treated his accusers a centerpiece of the campaign. Steve Bannon, the campaign’s chief executive, ran Breitbart News, a conservative website that eagerly promotes conspiracy theories about the Clintons.

Hillary Clinton, who is on pace to become America’s first female president if her lead holds, has tried to stay above the fray. She has yet to respond directly to Trump’s decision to resurrect accusations about her husband.