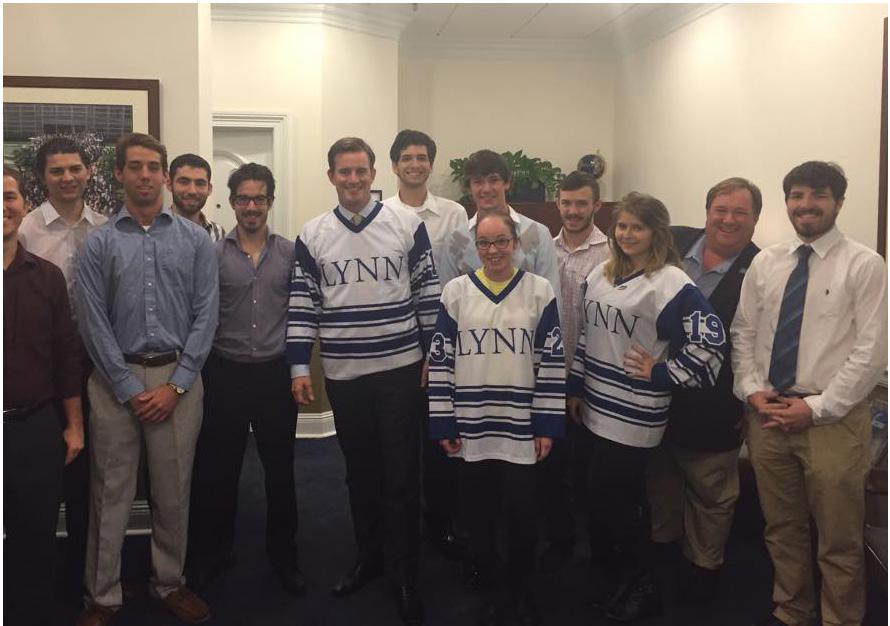 Lynn’s club hockey team is welcoming their second year of operation on campus with high hopes and big expectations.

Although it is still a relatively new program at the university, the team has been steadily gaining more recognition from both students and faculty, as well as other schools and counties.

For the past two years, the program has worked to recruit players for its team. The roster now stands at almost 30 players, five of which were new additions as of the current academic year. With the numbers finally up to the program’s desires, it is ready to take off and make a name for itself—though some might argue it already has.

Last year, the team made a lasting impression with only two losses out of a total of 25 games.

“Last year, the team had more bonding and were in better sync,” said returning player Jagar Bonham, sophomore. “But we are working with a new team right now and the season has only just started.”

Their record is currently 0 and 3, however, with a packed game schedule and practice every Thursday night at the Palm Beach Skate Zone, Bonham predicts a bright season is on its way in for the entire team, though it is further divided into two levels.

On team one, “the players are more competitive and have experience from programs like high school, club and travel teams,” said graduate student Kelvin Ma, a new addition to the roster. On the second team, he explained, are athletes who have not necessarily been playing for as long as the others have.

Regardless of any temporary divisions, the entire team knows that they are stronger together— on and off the ice.

“Many of the players are also involved with the fraternity Zeta Beta Tau (ZBT), and we spend a lot of time together, giving us an advantage of being able to effectively communicate with one another,” said team captain Noah Linkner, sophomore. Although Ma has no prior playing experience nor is he a part of ZBT, he said, “[my] teammates have been super supportive and have made [me] feel like a part of the team.”

It can be intimidating at times joining new clubs and trying things that have never been tried before. With a welcoming atmosphere however, where people are willing to learn and or teach, progress becomes achievable and acclimating to this environment becomes enjoyable.

Students interested in getting involved with the club hockey team can visit the Center for Student Involvement on the second floor of the Student Center above the dining commons.