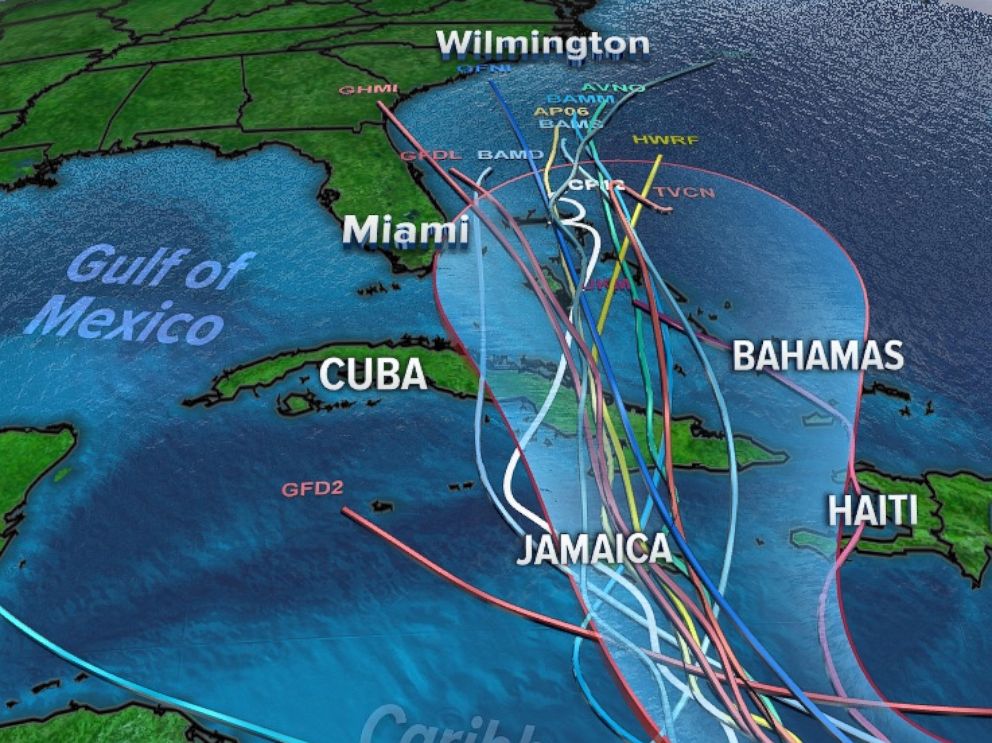 PORT-AU-PRINCE, Haiti (AP) — An extremely dangerous Hurricane Matthew moved slowly over the Caribbean on Sunday following a track that authorities warned could trigger devastation in parts of Haiti.

The powerful Category 4 hurricane had winds of 145 mph (230 kph) at late afternoon and the center was expected to pass across or very close to the southwestern tip of Haiti late Monday before reaching Cuba on Tuesday, the U.S. National Hurricane Center in Miami said.

A hurricane warning was in effect for Jamaica, Cuba and Haiti. Forecasters said the southern Haitian countryside around Jeremie and Les Cayes could see the worst of it.

“Wherever that center passes close to would see the worst winds and that’s what’s projected to happen for the western tip of Haiti,” said John Cangilosi, a hurricane specialist at the U.S. center. “There is a big concern for rains there and also a big concern for storm surge.”

Matthew is one of the most powerful Atlantic hurricanes in recent history and briefly reached the top classification, Category 5, becoming the strongest hurricane in the region since Felix in 2007. The hurricane center said the storm appeared to be on track to pass east of Florida through the Bahamas, but it was too soon to predict with certainty whether it would reach the U.S. coast.

Officials with Haiti’s civil protection agency said there were roughly 1,300 emergency shelters across the country, enough to hold up to 340,000 people. Authorities broadcast warnings over the radio telling people to swiftly heed evacuation warnings, trying to counter a common tendency for people to try to stay in their homes to protect them during natural disasters.

“The shelters are open but I don’t believe we have anyone inside them just yet,” said Joseph Edgard Celestin, a spokesman for the civil protection agency.

In a Sunday address carried on state radio, interim President Jocelerme Privert urged Haitians to listen closely to the warnings of officials and be ready to move at a moment’s notice.

“Don’t just think that God is good,” he said.

Teams of civil protection officials walked the streets of Les Cayes and other areas urging residents to secure their homes, prepare emergency kits and warn their neighbors. Many Haitians appeared unaware of the looming hurricane.

“No, I haven’t heard anything about a bad storm coming here,” farmer Jean-Bernard Mede said with a concerned expression as he took a break from walking three cows along a dirt track outside the flood-prone town of Leogane. “I’ll do what I can for my animals and my family.”

Forecasters said the slow-moving hurricane was expected to dump 15 to 25 inches (40 to 60 centimeters) of rain over southern Haiti, with a few places getting as much as 40 inches (100 centimeters).

The impoverished country is particularly vulnerable to devastating floods because of the steep terrain, with hillsides and mountains often devoid of trees that hold back water because they have been cut down to make charcoal for cooking fires. Many Haitians live in flimsy houses that are not able to withstand a serious storm, typically built of scraps of wood with corrugated metal roofs.

A hurricane watch was posted for the southeastern Bahamas and Turks and Caicos Islands. A tropical storm warning was in effect for parts of the Dominican Republic, where authorities began mandatory evacuations of areas at risk for flooding.

The hurricane earlier had been projected to be closer to Jamaica, but still was a danger to the island.

“The center of the system is looking more likely that it will pass to the east of Jamaica but it won’t miss it by that much, so they are still going to see impacts,” Cangilosi said. “The impacts are maybe going to be a little lower there than they would be in Haiti and eastern Cuba.”

After passing Jamaica and Haiti, Matthew was projected to reach Cuba, potentially striking on Tuesday near the U.S. Navy base at Guantanamo Bay, where authorities were evacuating non-essential personnel, including about 700 family members of those serving there.

Everyone remaining behind was being told to take shelter, said Julie Ann Ripley, a spokeswoman. There are about 5,500 people living on the base, including 61 men held at the detention center for terrorism suspects.

A report on state television showed the 85-year-old leader discussing the hurricane’s path with ministers and saying: “This is a hurricane we need to prepare for as if it were twice as powerful as Sandy,” the 2012 hurricane that devastated much of Cuba’s second-largest city.

Hundreds of Cuban soldiers were moving in convoys around the city and state workers with chain saws cut tree limbs overhanging power lines and homes. Trains from Havana to eastern Cuba were cancelled and the government called on residents of eastern Cuba to move livestock to high ground, tape up their windows and store potable water ahead of the hurricane’s arrival.