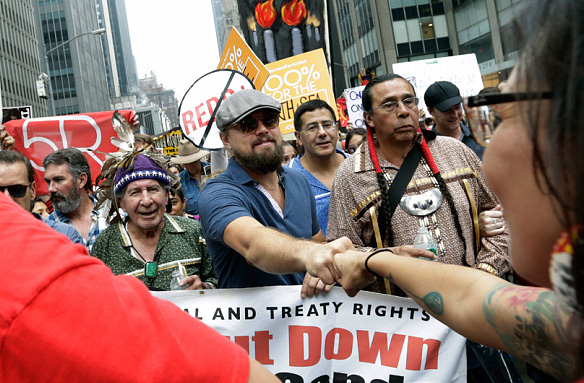 Following Leonardo DiCaprio’s nod to the growing concern for climate change in his well-deserved Oscar speech last month, a trend is forming amongst Hollywood A-listers to align themselves with the fight to combat global warming.

During his speech, DiCaprio stated, “Climate change is real and it’s happening right now. It is the most urgent threat facing our entire species, and we need to work collectively together and stop procrastinating.”

DiCaprio felt the severe effects of climate change during the filming for his 2015 blockbuster, “The Revenant.” 2015 was indeed the hottest recorded year and production for the film had to travel to what DiCaprio described as the “southern tip of the planet” – Argentina, just to find snow.

“We need to support leaders around the world who do not speak for the big polluters or the big corporations, but who speak for all of humanity, for the indigenous people of the world…and for those people out there whose voices have been drowned out by the politics of greed,” continued DiCaprio.

At age 24, DiCaprio established the Leonardo DiCaprio Foundation with the mission to help protect nature and wildlife around the globe, as well as raise funds for ocean and forest conservation, and climate change. DiCaprio has also produced many environmental educational movies such as ‘The 11th Hour.”

However, DiCaprio is not the first big name in Hollywood to use their celebrity platform to lead political charge. A-list couple Angelina Jolie and Brad Pitt may be the world’s most famous duo against climate change. In 2005, the two established the Jolie-Pitt Foundation and through the charity they have donated millions of dollars to humanitarian causes around the world. In fact, the couple donated the entire $2 million fee of their wedding-photos-exclusive to the foundation.

“I think it is really great that celebrities are using their platform to draw attention to important world issues,” said Aisling McEntegart, senior. “I have huge respect for people who utilize their audience to advocate for change.”

Also known on screen as the Hulk, Mark Ruffalo has been an advocate against the controversial process of hydraulic fracturing, or “fracking,” as well as the Keystone XL pipeline. In 2014, Ruffalo participated in the People’s Climate March and appeared on The Climate Reality Project’s “24 Hours of Reality.”

Veteran actress Daryl Hannah is another outspoken advocate against climate change and has even been arrested five times during protests for mountain top removal, fracking and the Keystone XL pipeline. She has started a website, dhlovelife.com, in which she shares solutions on how to live in conjunction with the suffering planet.

World News CELEBRITIES FIGHT FOR CHANGE Many Celebrities Are Fighting To Put An End To Climate Change Forever.