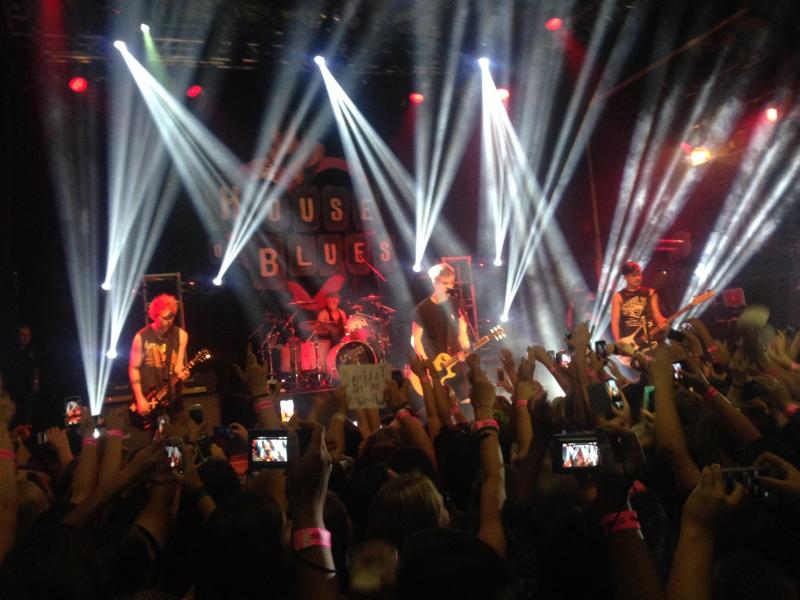 The talented Aussie boys who make up the hugely popular band, 5 Seconds of Summer ended their 5 month long “Rock Out With Your Socks Out” tour in West Palm Beach’s Perfect Vodka Amphitheatre this past weekend with a show that fans are going to remember for a long time.

Despite the humid South Florida weather, dedicated fans began to show up at the venue several hours before the doors opened hoping to catch a glimpse of the popular Australians. 5 Seconds of Summer, or 5SOS as they are affectionately referred to by their fans, seem to have the ability to unite droves of teen girls. Groups of girls decked out in 5 Seconds of Summer attire, who had never met before could be seen engrossed in conversation and swapping concert stories as if they were best friends.

Once it came close to the start time of 7.30 p.m. the excitement in the air was tangible. Before the boys hit the stage, their opening act Hey Violet played for about 45 minutes. Hey Violet, a California based group were a definite crowd pleaser. They seemed truly delighted to be on stage performing in front of such an enthusiastic crowd and appeared to have as much fun performing, as fans did listening. The performance was energetic and fun. Hey Violet are definitely ones to watch and will surely continue to rise in notability over the next few months.

The final show of long international tours are known for pranks that artists pull on one another. An array of hilarious antics occurred throughout the night, making the show even more memorable. The pranking began while Hey Violet were mid song when 5 Seconds of Summer took over with the large screens on either side of the stage, to display their faces. Following this the boys ran on stage just as the opening act were finishing up and grabbed various pieces of equipment. This early entry had fans shrieking with laughter, which would resume towards the end of the show.

5 Seconds of Summer had a truly epic entrance once they reappeared to perform for the crowd. A countdown clock displayed on the large on stage screens elevated anticipation and the moment the band appeared on stage the screaming of audience members was deafening. Dramatic flashing lights and dry ice added to the experience further.

These boys are adept at interacting with their fans while onstage. Despite thousands of fans being present, the concert felt intimate and personal. The boys promised fans that they would give them every last bit of energy they had left for this last show. Sometimes between songs the boys would get into funny little conversations among themselves, which came across as natural and candid.

The set list comprised of a wide variety of the band’s vast collection of songs. Old favorites like “Disconnected” and “Out Of My Limit” were played, along side brand new tracks “She’s Kinda Hot” and “Jet Black Heart”. A lucky fan was even brought on stage to play a guitar solo alongside the band, evoking envy among spectators. The band stuck to their promise of giving all their energy to this final show and absolutely killed each and every song performed.

The finale of the show is perhaps what made it standout and really showcased what genuinely lovely and down to earth people these boys seem to be. They called all of their crew members onstage to thank them for their hard work over the last few months and proudly applauded them. The crew members then proceeded play a prank of their own, throwing large beach balls at the boys, who in turn kicked them out into the crowd for lucky fans to grab onto.

However, it was Hey Violet who had the last laugh when it came to the pranking game with one of the band’s members dressed in a Spiderman costume spraying silly string at 5 Seconds of Summer as performed their final song of the night.

Following the amazing performance given by both Hey Violet and 5 Seconds of Summer, those present at the show will be talking about this amazing night for months to come and despite this tour just concluding, fans are already eagerly anticipating the next time the boys will hit the road.