Senior Casie Binkowski has never missed one single Men’s Soccer home game since her freshman year back in 2011. Binkowski has also made many trips to a lot of away games on the road.

“It all started through a friend who introduced me to Jason Sangha [senior and four year captain on the Men’s Soccer team],” said Binkowski. “Through [Sangha] I met the team and never stopped supporting my friends.”

Now Binkowski is close to graduation but she can look back knowing that she found her lifetime friends on the soccer teams ever since 2011. With a smile on her face, Binkowski admits that she has even skipped classes for Lynn’s home games when they collided with her schedule.

The first time during Binkowski’s college career, The Men’s Soccer team made it all the way to the finals in 2012. Even though she was trying to organize a bus for students to drive up to Evans, Ga., it ended up falling through.

However, when Lynn made it back to the final in 2014, she knew she had to be one of the fans in the stands to show support. The only problem was that the final was in Louisville, Ky.

“I tried to see the final in 2012 but for some reason it did not work out because of school, but in 2014, as a senior in my last year, I knew that this was my last chance to experience a final and a championship,” said Binkowski. “The fact that half of the roster are my closest friends made mydecision even easier.”

Binkowski, better known as “Binky,” grabbed the chance and flew to the final four with one of her friends. The funny story was that no one on the team even knew that they were traveling to show support. She planned a surprise trip across half the country – and what a trip it turned out to be.

When Binkowski got off the plan she went straight to Bellarmine College’s soccer field to see the boys play in the semi-finals. Since they came one hour prior to the game they did not want to be seen, which led her to hide behind trees at a chapel overlooking the field. Five minutes before the National Anthem, Binkowski ran down to the bleachers and hid behind an umbrella.

As soon as the team lined up, Binkowski held up banners and cheered the team on.

“The looks on the guys faces when they saw us brought tears to my eyes,” said Binkowski.

Looking back, she summarizes her spontaneous trip as an amazingly perfect decision.

“Honestly it was probably one of the best experiences of my life,” said Binkowski. “The atmosphere when the team was presented the trophy at 4th street in Louisville was unreal – being able to share that moment with my friends, knowing how hard they worked for it was the best feeling ever.”

Lynn is proud of people with strong school spirit such as Binkowski. She is hoping for another Men’s Soccer championship run in her years to come as a graduate student at Lynn. Binkowski just may be the lucky charm that the team needs to repeat history.

Chris Hellmann is a Lynn's Men Soccer player from Germany. Hellmann plans to play professional soccer after graduation. Not only is Hellmann dedicated to playing sports, but also writing about it. He started working in the field of journalism by working for a local newspaper in Germany. He also worked with a German professional soccer team where he covered games and worked with the advertising department. 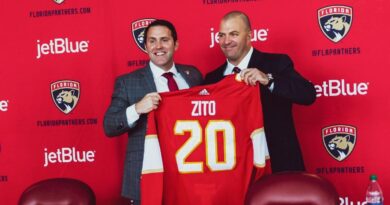 Can the Cats Finally Claw to the Top? Florida Panthers Season Preview