Over the past few years, Marvel Studios has been steadily growing with the release of a number of different movies that somehow manage to tie into the universe that they are all a part of.

So it is no surprise to hear that they have new movies coming out after next year’s “Avengers: Age Of Ultron” and “Ant-Man” films. However, nobody could have expected that Marvel’s next phase would  be so big.

Marvel has announced nine new films for Phase three of the Marvel Cinematic Universe. That brings the total number of films in this stage to 10, including “Ant-Man.”

“Ant-Man” will kick off this new phase in July 2015, but “Avengers 2” will lead into the next event that comes after that film.

The first film to be released after “Ant-Man” is “Captain America: Civil War” in May 2016. The film will be based off the comic book storyline “Civil War” written by Mark Millar.

The storyline saw the U.S. Government pass the Superhero Registration Act that forced superheroes to register themselves to the government. While Iron Man supported the bill, Captain America was appalled by this act and started a resistance to oppose the act.

“I would have to ‘Captain America: Civil War,’” said Cody Gold, sophomore. “I’m interested in knowing Captain America’s pursuit to find and rejoin with Bucky.”

After “Captain America 3,” “Doctor Strange” will release in November 2016. The film will follow the exploits of Dr. Stephen Strange with Benedict Cumberbatch eyed for the lead role. This film will introduce the supernatural element of the Marvel Cinematic Universe.

In May of 2017, “Guardians of the Galaxy 2” will see the return of everyone’s space outlaws. The film will reveal who Peter Quill’s father is and James Gunn will return to write and direct the film.

Following in July of 2017 is “Thor: Ragnarok.” Details on the story are currently unknown, but with the title, one could assume that it could spell doom for Asgard.

In November of 2017, “Black Panther” will see the titular character get his own film on screen for the first time. Chadwick Boseman, star of “42” and “Get On Up,” will play the character. Marvel has stated the character will first appear in “Captain America 3.”

Marvel will then kick off a cosmic event in the form of “Avengers: Infinity War.” The film will be split into two parts with Part 1 to be released in May 2018 and Part 2 in May 2019.

Two films will take place in between both films starting with “Captain Marvel” in July 2018. “Captain Marvel” will be Marvel’s first female superhero movie with DC already working on “Wonder Woman” for 2017.

The final piece to the puzzle is November 2018’s “The Inhumans.” The film will star a subspecies of humans that were experimented on by Kree aliens and given powers 7,000 years ago. It will most likely showcase the Inhuman kingdom of Attilan and its king Black Bolt along with his companions.

“I’m excited for Inhumans because it sounds like it has aliens in the movie,” said Jake Golden, freshman.

With this many movies announced, this phase will prove to be Marvel’s biggest yet and will showcase more aspects of the universe.

Fall Semester Comes To An End

A Small Piece Of Europe In Miami 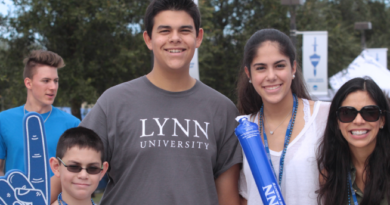